But while it’s important to have beneficiary designations in the first place, that might not be enough. For those of you who have contingent beneficiaries (such as grandchildren or nieces and nephews), there’s a distinction you should be aware of: that distinction is ‘per stirpes’ versus ‘per capita’ distribution.

This article won’t suggest either course of action (the right decision is what truly reflects your intent, and should probably complement the rest of your estate plan). However, this article aims to help illuminate the difference between 'per stirpes' and 'per capita' so that you can make a fully informed decision when updating your beneficiary designations.

Does everyone have to worry about this?

Let’s make that very clear. If you only have one heir (other than your spouse), then it really doesn’t matter. It also doesn’t matter if you plan to give your fortune to charity, or if you simply decide that it doesn’t matter (which happens more than I would have guessed).

But if you have multiple children (and grandchildren), special needs situations, or just ‘normal’ to complex estate planning considerations, then you’ll probably want to know the difference.

Per Stirpes (Latin for ‘by branch’)

Per stirpes distribution means that if a beneficiary predeceases the account holder, then any assets that would have gone to that person are distributed to that person’s surviving descendants instead.

Pointing out the Latin derivative (by branch) might make this easier to remember—per stirpes distribution keeps it within ‘the branch’ of the deceased child’s family, by passing it on to their surviving descendants.  This might be something to consider if you want your grandchildren to eventually end up with that money.

John dies, leaving the IRA to his sons.  Each son's share equals $150,000—this would hold true under either per stirpes or per capita distribution. 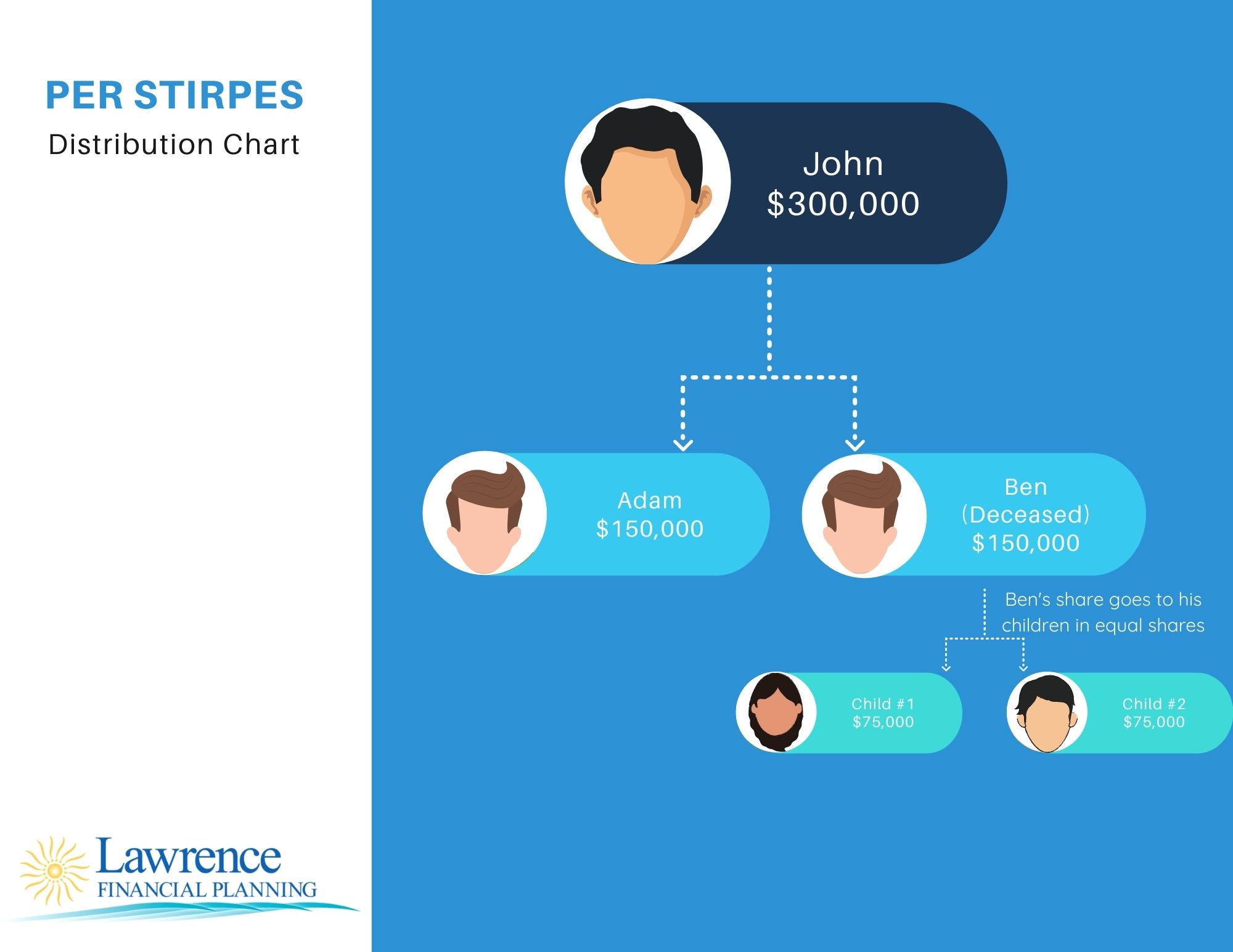 Let’s now assume that Ben pre-deceases John, but Adam does not. Under per stirpes distribution, Adam would still receive his $150,000 share, but Ben’s share would now be divided equally amongst his two children:  $75,000 each.

Per Capita (Latin for ‘by the heads’)

Per capita distribution means that if a beneficiary predeceases the account holder, then any assets that would have gone to that beneficiary are simply distributed to the remaining similar beneficiaries.

Remembering the Latin origin might help here as well—distributing the money to the ‘remaining heads’ of the family. 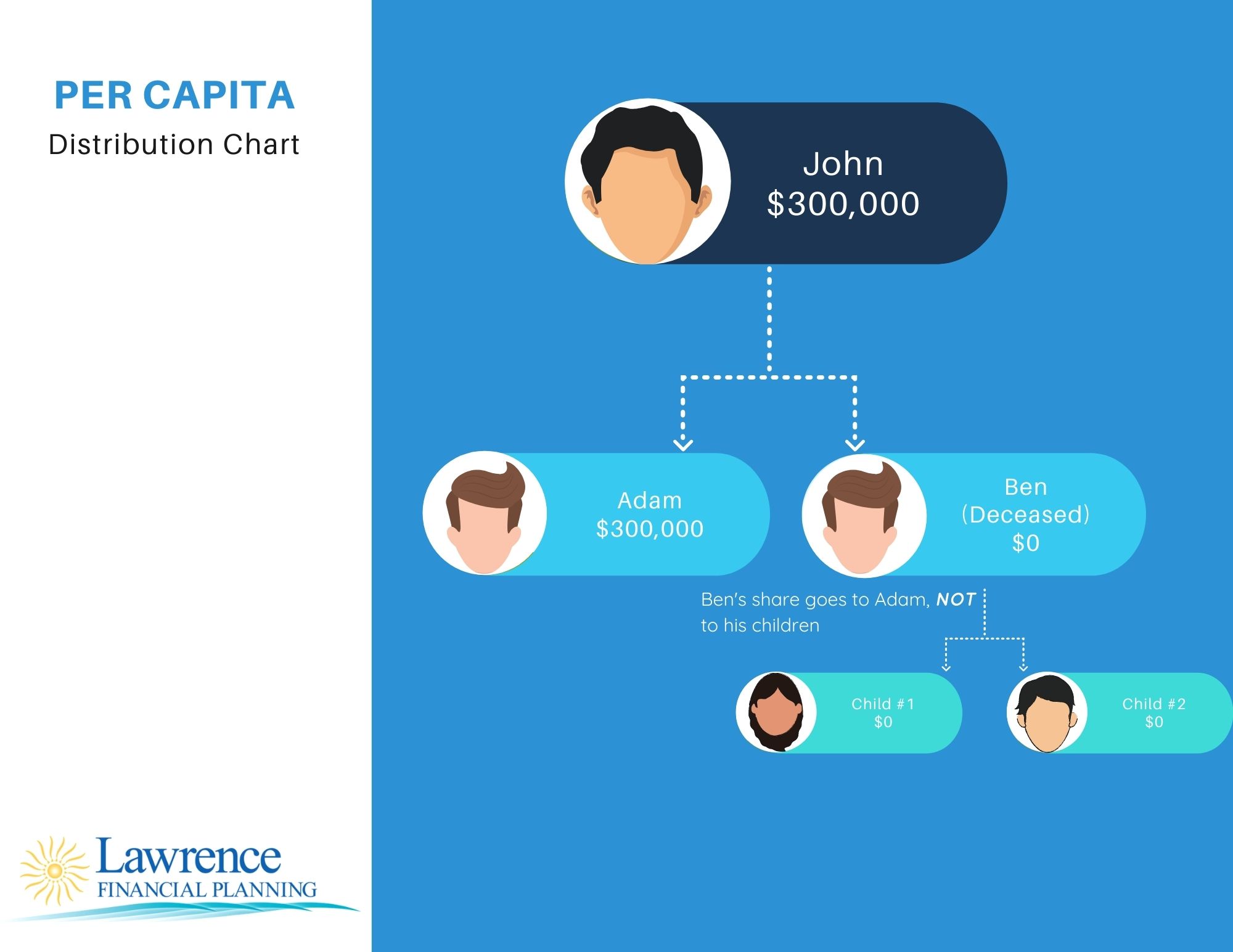 Per capita distribution leaves Ben's children in the cold.

In this scenario, if Ben were to pre-decease John, then Adam would receive the entire IRA distribution, while Ben’s children would receive nothing.   This might be something for grandparents to consider who do not want their grandchildren receiving the money directly.

The advice in this article stops here.  There are plenty of scenarios that could play themselves out, which are well beyond the scope of any article. That is why it is important to periodically revisit your estate planning (which includes beneficiary designations). At the very least, you should review this each time someone passes away, someone is born, or if there is another significant life change (such as a marriage or divorce).

A good financial planner can help you evaluate your estate plan and understand how it might impact your finances.  And if you’re ready to take the next step and work with a financial planner, you can learn more about how we work with clients right here.

The foregoing content reflects the opinions of Lawrence Financial Planning, LLC and is subject to change at any time without notice. Content provided herein is for informational purposes only and should not be used or construed as investment advice or a recommendation regarding the purchase or sale of any security. There is no guarantee that the statements, opinions or forecasts provided herein will prove to be correct.  Past performance may not be indicative of future results. Indices are not available for direct investment. Any investor who attempts to mimic the performance of an index would incur fees and expenses which would reduce returns.   Securities investing involves risk, including the potential for loss of principal. There is no assurance that any investment plan or strategy will be successful or that markets will recover or react as they have in the past.